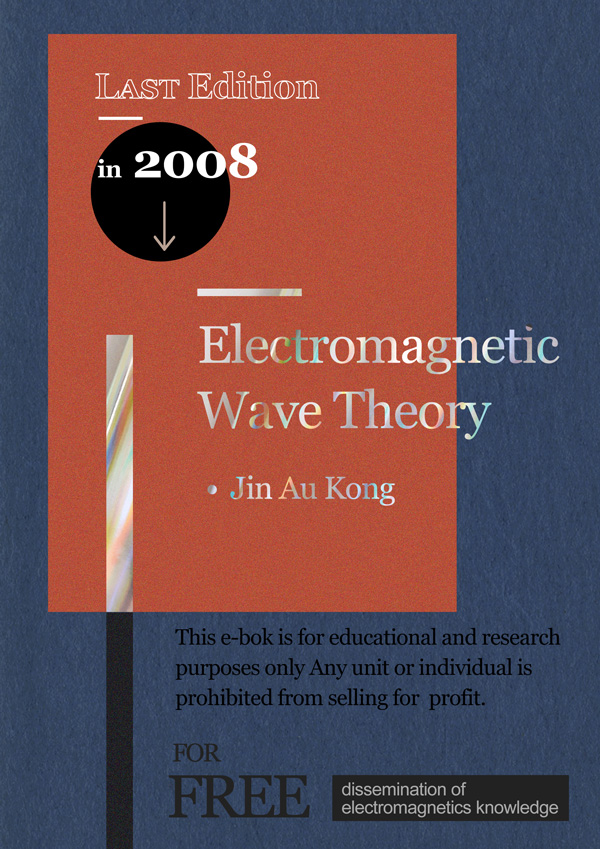 This book presents a unified macroscopic theory of electromagnetic waves in accordance with the principle of special relativity from the point of view of the form invariance of the Maxwell equations and the constitutive relations. Great emphasis is placed on the fundamental importance of the k vector in electromagnetic wave theory. We introduce a fundamental unit Ko = 2π meter−1 for the spatial frequency, which is cycle per meter in spatial variation. This is similar to the fundamental unit for temporal frequency Hz, which is cycle per second in time variation. The unit Ko is directly proportional to the unit Hz; one Ko in spatial frequency corresponds to 300 MHz in temporal frequency.

The various topics in the book can be taught independently, and the material is organized in the order of increasing complexity in mathematical techniques and conceptual abstraction and sophistication. This book has been used in several undergraduate and graduate courses that I have been teaching at the Massachusetts Institute of Technology.

The first version of the book was published in 1975 by Wiley Interscience, New York, entitled Theory of Electromagnetic Waves, which was based on my 1968 Ph.D. thesis, where the concept of bianisotropic media was introduced. The book was expanded and published in 1986 with the present title and its second edition appeared in 1990. Since 1998, it has been published by EMW Publishing Company, Massachusetts. The development of the various concepts in the book relies heavily on published work. I have not attempted the task of referring to all relevant publications. The list of books and journal articles in the Reference Section at the end of the book is at best representative and by no means exhaustive. Some of the results contained in the book are taken from many of my research projects, which have been supported by grants and contracts from the National Science Foundation, the National Aeronautics and Space Administration, the Office of Naval Research, the Army Research Office, the Jet Propulsion Laboratory of the California Institute of Technology, the MIT Lincoln Laboratory, the Schlumberger-Doll Research Center, the Digital Equipment Corporation, the IBM Corporation, and the funding support associated with the award of the S. T. Li prize for the year 2000.

During the writing and preparation of the book, many people helped. In particular, I would like to acknowledge Chi On Ao for formulating the TEX macros, and Zhen Wu for editing the text and constructing the index. Over the years, many of my teaching and research assistants provided useful suggestions and proofreading, notably Leung Tsang, Michael Zuniga, Weng Chew, Tarek Habashy, Robert Shin, Shun-Lien Chuang, Jay Kyoon Lee, Apo Sezginer, Soon Yun Poh, Eric Yang, Michael Tsuk, Hsiu Chi Han, Yan Zhang, Henning Braunisch, Bae-Ian Wu, Xudong Chen, and Baile Zhang. I would like to express my gratitude to them and to the students whose enthusiastic response and feedback continuously give me joy and satisfaction in teaching.